skip to main | skip to sidebar

"I consider that my work won't be finished until I am dead and buried, and I hope that's a long, long time."
- John Lennon, December 8, 1980 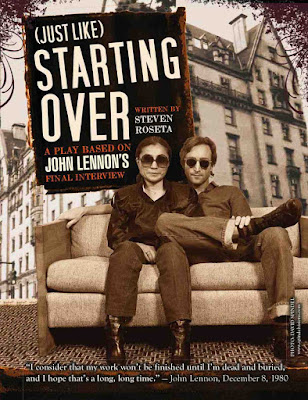 J&Y Photo: David Spindel www.spindelvisions.com
THE PLAY
(Just Like) Starting Over by Steven Roseta candidly portrays John Lennon’s final interview on December 8th 1980, just hours prior to his tragic murder. Meticulously researched and elegantly written, this three-person play will leave audiences feeling that they may know Lennon on a genuinely personal, and profound level.

The play is both compelling to watch, and historically authentic. It is largely based upon an unpublished interview with John Lennon and Yoko Ono on that fateful day.

John had just emerged from a five year sabbatical and was poised to make a triumphant comeback on the music scene with the recent release of Double Fantasy, a new album created in collaboration with Yoko. John talks about his music, baking bread, being a father, politics, war, his relationship with Yoko, feminism, and ironically death.

(Just Like) Starting Over is not a multi-year retrospective about a rock icon from afar, nor is it a musical. Rather, it is an up close and first person experience with the flawed and brilliant human being who was John Lennon, in his own words and without outside interpretation.

This dialogue rich play is au naturale in its presentation, and is intended to make audiences feel like a 'fly on the wall' inside the Lennon's quarters in the Dakota, New York’s landmark apartment building, on the last day of his life.

Yoko Ono: Age 47, and petite. Her hair is jet black and tied back. She is dressed in black and wears dark wraparound sunglasses.

Interviewer: He is an accomplished radio interviewer in his late thirties.

Set
The entire play occurs in Yoko Ono’s office in the Dakota. There is a desk & swivel chair, two additional guest chairs, and a sofa. Atop Yoko’s desk sits a tape recorder, a microphone, a notepad, and a telephone/intercom.

Audio/Video
Images and music (from Double Fantasy) are used on a limited basis in support of the stage dialogue.
THE WORLD PREMIERE
Seattle Public Theater at the Bathhouse on Green Lake staged the world premiere of (Just Like) Starting Over, September 6-17, 2006. Presented by director James Veitch, this remarkable production moved and inspired theater audiences, Lennon fans, and stage critics alike.

“A big thanks to director James Veitch, a virtual walking encyclopedia of John Lennon information, for coming all the way from England to take the controls of this marvelous production.”
– Steve Wright, Producer of (Just Like) Starting Over

“Can an afternoon interview with a doomed rock star be transformed into a two-act play? If the author is local playwright Steven Roseta and David Natale is playing John Lennon, the answer is yes.”
–Seattle Times, John Hartl

“… a full expression of what Lennon had to say at the end of his life”
–Seattle Sound Magazine, Shelley Germeaux

“(Just Like) Starting Over explores the multiplicity of Lennon's character while inviting the audience to draw their own conclusions.”
– North Seattle Herald-Outlook, Sean Molnar